I followed the evil scientist into a dark room. What I saw, I would never forget. Well technically, at first, it wasn’t much of what I saw, but of what I heard. I could hear him talking in that sinister and creepy voice; laughing in his deluded and senile methods. Suddenly, the lights flared up. I tried to run out but I couldn’t. I was tied up.

I think I forgot to mention that I may have followed him involuntarily. After all, who in their sane mind would follow an evil scientist into a dark room? The logic of doing such an act is inconceivable. Yet, as I lay there on the stretched foam-canvas, trying to bulge my wrists and ankles free from the chains that bound me, I thought back to the moment where my logic did deceive me. I did not reach my current predicament because I was hunted down, but because I did do something implausible. It all started, as it usually always does, when I met this person. I cannot recall much of this person, except for the fact that he appeared mystical, mysterious, and somewhat cryptic.

Now as you may remember, Monday’s are my “Park Days”. Hence, there I was, sitting on my favorite bench, at my favorite park: “La Mondial du Playdon”. Since you already know why it’s my favorite, I won’t go into much detail. So, as I was saying, I was delightfully enjoying the cool breeze, the warmth of the sun, the chirping of the birds, and the pitter-patter of passer-by walkers and joggers. When a figure loomed over me and asked me if he could sit next to me. I didn’t pay much attention to what he looked like, except that he wore a brown overcoat, and black top-hat. The sun restricted me from being able to take a good look at his face, not that I really cared either. It was just the aroma around him that pricked me. Now as you may have realized, I like to talk a lot. So, being the ecstatic, extrovert that I am, I turned my face towards him, spread my lips wide, and proceeded to extend a formal greeting to him. That imbecile did not even have the decency to reply. All he did was try his best to keep his face hidden from me. Here I was, allowing a complete stranger, to share my favorite bench, at the world’s greenest and most beautiful park, and he couldn’t even be bothered to say “Hello”. He wasn’t even doing a good job of hiding his face. I could clearly see his long and wavy black hair, falling down till his shoulders, covering his ears; and his long-pointy nose. I didn’t bother to pay much more attention. I just puffed in disgust, and went back to reading my book. About ten minutes later, he spoke, in a soft, deep, and dark voice, “It’s time.”

I decided to give him the cold shoulder as well, so I didn’t respond. He repeated his phrase again. I decided to ignore him again. This started to seem like a game. Yet, he kept repeating the phrase. Finally, my curiosity got the better of me. I turned to him, and sort of exasperatedly blurted out, “What? What? What? It’s time for what?” He shifted his neck to look at me. That’s when I got the chills for the first time. His eyes were dark red. They looked as gory as blood itself. My goose pimples got goose pimples. All I could do was inhale.
Apart from his ‘vampire-like eyes’, he also had a small scruffy beard. If he wasn’t as thin as he looked, and wore black pants, I would honestly have considered him to be a werewolf in disguise. I guess this how they came up with the phrase “A wolf in sheep’s clothing” and whatnot.
“You will know soon enough, my dear.” He said this in soft, monotonous tone. The effect was like the sound of a bell churning at Midnight in a haunted mansion. I gulped in all the air, and continued to hold my breath. He stood up, and winked at me; as if to tempt me. I could not figure out what he wanted with me, or why, but whatever it was, I didn’t want it to happen. As he walked away, I freaked out, jumped up from the bench, and ran home. What if he came back? I didn’t even have my pepper spray with me, and I was only a beginner in Karate. Besides, what good is a female in fighting against a male? We’ve been designed to be physically weaker than men. If I were to stay there, I would have no hope of surviving.

Well, this is where the story sort of gets dull. It’s just stories of me explaining my predicament to basically anyone who would listen and pity me. I did enjoy the free meals of soothing I got from my family, the gifts I got from my best friends and the gossip that spread from my encounter of the creepy “wicked-man”. So, let’s just fast-forward to the day I was captured. Honestly speaking, I don’t even remember how I got trapped by this vile man. All I know is that I went back home from my class at the University and decided to take a nap. When I opened my eyes, I was tied up!

I was on the type of movable beds they have at hospitals. The only difference was that this one was moving by itself. I looked around to try to see if it was remote controlled, or moving on an automated mover (like an escalator); when I sensed the aroma of the same creepy man I had encountered at the park. I did not get scared too much in the beginning because I kept thinking it was a dream. Yet, it all felt so real. When the realization finally hit me, I screamed, or at least tried to, but I couldn’t say anything. There was nothing quite discernible that was stopping me from speaking either. I just couldn’t talk. By this time, I was petrified.

This villain was either a magician or a very smart scientist, to be able to have found a way to prevent someone from saying anything. This is the part where we get back to what I was saying at the very beginning. I looked around, trying to see where I was. My long straight hair prevented me from noticing much, but I saw a number of flasks, machines, gadgets, and other scientific tools. I’ve never really done much science or anything, but I knew this was some sort of secret lab. So that was his plan. I kept thinking that this is what he meant by what he said at the park. I was going to be his human lab rat. Who knew what he was going to do to me? I kept going back to all the “evil scientist” movies I had seen to try and imagine what would happen. However, when you’re on the moment, and your heart is racing faster than a Ferrari, your skin is as wet as a dolphin, your hair standing on edge. Your brain cannot really focus much on recall. All it can think of is the basic human instinct of survival; escape. This vile, vicious man kept laughing and laughing. I could not understand what he was trying to do. He also kept mixing his green and blue colored liquid flasks. He then added a few purple pills in the solution he had concocted. This was it, this was my end. No one would know what happened to me. No one would know how I left this planet. Would someone bother to find out? Would someone bother to avenge my death? Would someone stop this dastardly fiend before he finds his next victim?

One of his mechanical tools came down from the ceiling and forced me to open my mouth. He dragged his feet ever closer. I could hear my heart pounding. It felt like heavy metal drums were playing inside my body. If there was music playing, it would point to imminent death; like they do in “Jaws”. He then proceeded to pour the drink he had created down my throat. No stops. He forced me to drink the whole thing at once. There was not much capability, nor ability to resist. As soon as I had the last sip, I closed my eyes. When I opened them again, I found myself lying on my bed, my arms and legs spread outward like they were in the scientist’s layer. My dad was standing next to my bed, wearing his favorite brown over-coat, his long wavy black hair falling down to his shoulders, complimenting his long-pointy nose. He had my medicine flask in one hand, and his black top-hat in the other. He then proceeded to tell me, in his deep voice, to get ready for my visit here.

I still don’t know what the scientist made me drink, nor do I know what he wanted with me. However, I’m still glad that my father was around. What would I do without him?

Well, there you go doctor. That was what happened to me today. If by any means you happen to encounter this sinister “Wicked-man”, stay away. He may still be watching me. I can still hear him saying things to me from time to time. This is a scary world we live in. 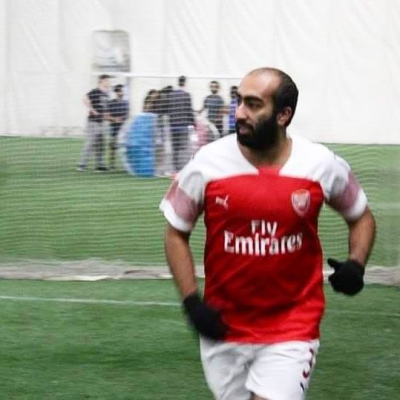 I enjoy writing stories and poems. I hope to one day become a published author or poet. I've had an anthem published in my school magazine and I'm hoping to take my talents further by sharing my Social Word.
walizia@outlook.com